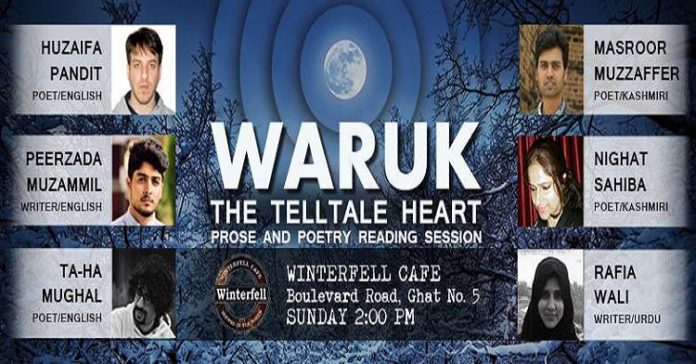 Srinagar: A poetry and prose reading session titled “Waruk – The Telltale Heart” is being organised in Srinagar in a bid to regain the lost utility of social spaces in the valley.

“WARUK – The TellTale Heart, a reading session of poetry and prose is aimed not only to regain the lost utility of our social spaces but also to provide a platform for those who write or aspire to write and are certainly a promising future of our intellectual community”, say the organisers.

The organising team itself consists of multi-dimensional persons. While Taha Mughal is an architect, writer and an artist himself; Peerzada Shiekh Muzamil is a writer, graphic artist and a freelance cinematographer. Similarly, Anis Wani is a photographer, an artist and a sculptor.

The event will have two sessions, first being primarily for poetry and a Classic rendition of Saadat Hassan Manto in the voice of Mr. Rashid Maqbool while the second session will comprise of both poetry and prose readings.

Six writers from three prime languages of the state; Kashmiri, Urdu and English will recite their works and the session will be streamed live on social media. 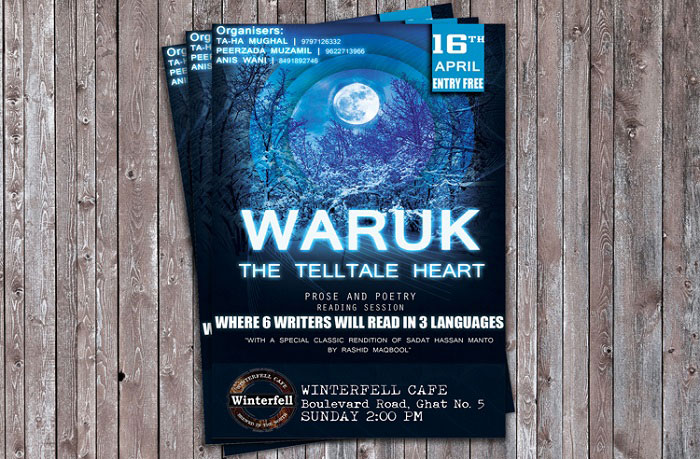 “All those interested in writing have always been taught to read and listen more than write and all such dear friends stand invited for this celebration of life, literature and longing. There are many others who ‘bleed on the typewriter’ much like you do too in your solitude. Won’t you come to discover them?”, reads the invitation to the aspiring writers. 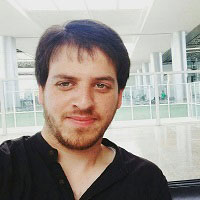 Huzaifa Pandit was born and raised in Kashmir. He is pursuing a PhD on “Faiz Ahmed Faiz, Agha Shahid Ali and Mahmoud Darwish – Loss, Lyricism and Resistance” at University of Kashmir.

His poems, translations, essays and papers have been published in various journals like Indian Literature, PaperCuts, CLRI, Punch and Muse India. He is fond of Urdu poetry, Urdu and old Bollywood music. He hopes to publish a book of his translations soon. 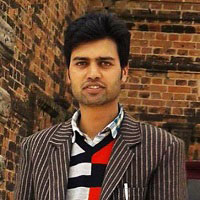 Masroor Muzaffar is an M.A B.Ed. He writes poetry in Urdu and Kashmiri. Many of his works have been sung by famous singers of Kashmir such as Aijaz Rah and Altaf Sahil. 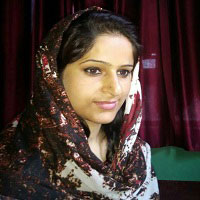 Nighat Sahiba is a poet who hails from Anantnag. She has done her PG (History) and is an M.Ed. Her writings in Kashmiri and Urdu are generally themed around Feminism, Existentialism and Love.

She is published in all prestigious Kashmiri journals like Neab International, Nehej, Sheeraza, Faryaad and Taabeer and has recited her poems in many State and National level poetry festivals.

She was also awarded with the Akber Jaipuri Award 2014 for being the youngest best poet of Urdu, a recognition by Urdu Academy Delhi for her contribution to Urdu poetry. She is an active member of many literary groups of the state. Her book on Kashmiri poetry ‘Zard Paneki Dair’ (A Heap of Shriveled leaves) published in December 2016 is all set to be released this month. 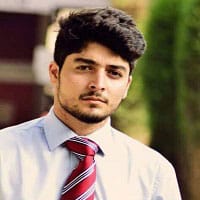 Peerzada Sheikh Muzamil is a Humanities Undergraduate, currently studying at Amar Singh College. He is born and raised in Srinagar.

His writings, mostly fiction, revolve around the theme of Chaos, Disorder and Death. Despite crafting Short Stories, Peerzada Muzamil writes on the diverse subjects including Philosophy, Popular Science, Economics, Religious Liberalism and Politics. He occasionally writes poetry too.

Inspired by the Great American Giants, Edgar Allan Poe and Ernest Hemingway, His works have been published in Daily Newspapers like Greater Kashmir, Kashmir Reader and Fort Nightly tabloids like Mizrab and other online magazines. His short stories are often a subtle blend of Gothic Horror and Existential Crisis.

Associated with Jammu and Kashmir Fiction Writers Guild, he has also taught at various creative writing workshops. Besides writing fiction, non-fiction and occasional poetry, he is a Graphics Artist, Freelance Cinematographer, Digital Marketing Advisor, and co-founder of Kashtales.

Presently, he is filming the series of documentaries related to Art, Culture, Society, Language and Literature, Historical and Religious Heritage of Kashmir. Whenever he finds himself struggling with Writers Block, he often slips away into his hobbies which include listening and talking to strangers, singing Classical Music, Photography and Stand Up Comedy. 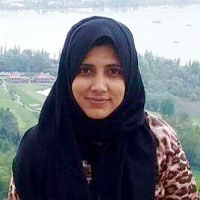 Rafia Wali was born in 1982 in north Kashmir’s Sopore district. She is presently pursuing her Ph.D at Central University of Kashmir. Her short stories in Urdu language are generally bold and revolve around themes of Feminism and Sexuality.

Her short stories like Lazzat (Taste), Khaeth (Field) and Papri – a story based on Bihari women have earned great acclaim among the literary circles of the state. She is associated with Adbi Markaz Kamraz and keeps reciting her stories at Jammu and Kashmir Fiction Writer’s Guild, Abi Guzar. 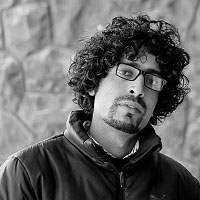 Taha Mughal is a notorious prankster and wanderer at heart who keeps searching for life in its little moments. After completing his Bachelors in Architecture and Landscape design, he has been practicing as an architect at INTACH, Kashmir where he is currently working on the restoration of S.P.S Museum, Lal Mandi.

Because he often fails to capture ‘beauty in stone’ the way he ideally imagines it, he often extends himself to painting and writing as well. When relations and work fetter, he suddenly disappears from phones and internet for weeks and sets out on solitary travels with his notepads and sketch-books.

He is a four time gold medalist, once also honored by the then President of India Dr. A.P.J. Abdul Kalam with a ‘Child Scientist Award’ (2008) for one of his researches on Aquatic-biodiversity of Dal lake and disposal of Polythene.

A National debater and orator, his audiences also include the ex-president of India Shrimati Pratibha Singh Patel. He has participated in over 7 International and many other National events on Art, Architecture and Literature. His paintings and writings often dark and melancholic revolve around metaphysics, existentialism, love and loss.

He currently contributes to Greater Kashmir as a columnist while his writings and poems have also been published by The Speaking Tree (Times of India), Children’s Magazine, Children’s Digest, Student Today, Miraas, KashmirLit, Shiraza, and Etalaat. Besides, his translations of some Kashmiri short stories have also appeared in Rising Kashmir.

He is associated with Dara Shikwoh Center for the Arts, Kashmir Young Artists Association and is also a member of Jammu and Kashmir Fiction Writer’s Guild and Kalamkaar Samith.

Tired with no hope of publishing his book anytime soon, he is currently working on defaming himself. The latest incident includes stealing plants from a government nursery and immediately getting caught.

The Art of Making Snowman in Kashmir