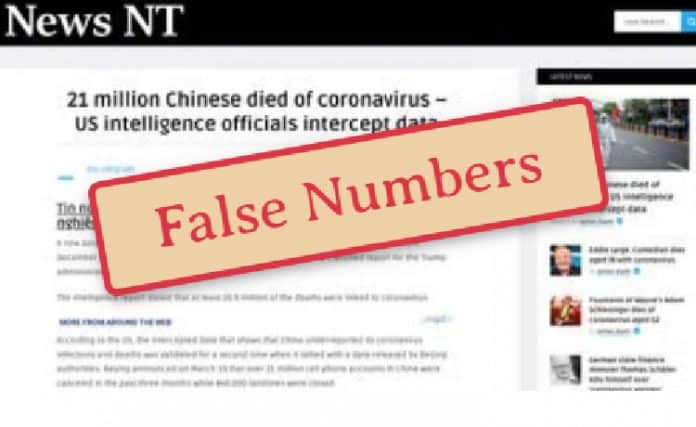 SRINAGAR — Did new intelligence data reveal that 21 million people died in China from December 2019 to March 2020 due to the novel coronavirus? No, that’s not true: An online article being shared uses a statistic about a drop in cellphone users to make a faulty supposition that this figure reflects COVID-19 deaths in China. These numbers are not correlated, fact checkers have previously shown.

The claim appeared in an article (archived here) published by News NT on April 4, 2020, under the headline “21 million Chinese died of coronavirus – US intelligence officials intercept data.” It opened:

A new data intercepted by the United States reveals that 21 million people died in China from December 2019 to March 2020, US intelligence officials conclude in a classified report for the Trump administration. The Intelligence report stated that at least 20.9 million of the deaths were linked to coronavirus.

According to the US, the intercepted data that shows that China underreported its coronavirus infections and deaths was validated for a second time when it tallied with a data released by Beijing authorities. Beijing announced on March 19 that over 21 million cellphone accounts in China were canceled in the past three months while 840,000 landlines were closed.

Users on social media saw this at the time of this writing:

Even though the original link for the report is down, the archived item has gone viral. On April 13, 2020, the site republished the story using a different URL.

The article has also been copied word-for-word by other sites, including one that only changed the name of the “author” from James Alami to Alavi.

The original story mentioned that an intelligence report concluded that China has deliberately underreported the number of COVID-19 cases and deaths in the country. While it’s true that a new report does suggest China’s official figures are false, the News NT story incorrectly linked that reporting to a separate one about cellphone cancellations.

The result is a sweeping assumption that misinterpreted why millions of cellphones were cancelled. Several fact checkers have previously looked into rumors that suggested a drop of 21 million cellphone subscribers in China meant that China was significantly underreporting the COVID-19 death toll. The Associated Press called out this claim as false:

A representative with China Mobile Ltd. said while the situation was related to the COVID-19 outbreak, it was not related to deaths, but changes in lifestyle.

“It was mainly due to reduced business and social activities resulting from the COVID-19 outbreak,” a spokesperson with the company confirmed to the AP. “Many customers in China have multiple SIM cards and it is common that they use their non-primary SIM cards to do these activities.”

Republic TV, an English-language news channel in India, also said the statistics were being misinterpreted. It reported:

Expert analysts believe that the drop in the mobile users could partly be responsible for the number of migrant workers who cancelled their work region mobile subscriptions as the virus prevented them from entering the country after the lunar holidays in China.

There is no reporting to suggest that all 21 million cancelled phone contracts were due to deaths from COVID-19. That assertion is highly improbable.

News NT is a relatively new player online; its domain name was only registered a month ago. A subheadline written in Vietnamese in the republished English-language article suggests the site originates from that Southeast Asian country.

We reviewed its content and noticed a mix of real and fake stories. For example, there’s an article that stated the Thai king has tested positive for coronavirus in Germany. It’s true he was self-quarantining in Germany, but there is no reporting that he had come down with the new coronavirus.

Either way, the original story is false and wrongly interpreted data from Chinese cell phone companies to make a broad claim that isn’t backed up by facts.

Extension of Financial Year to June 30?