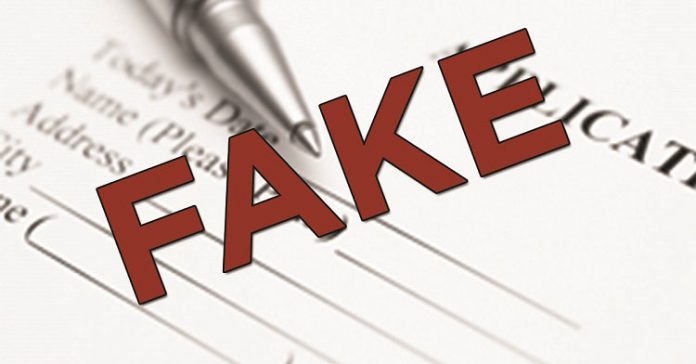 Srinagar: Haji Ghulam Mohd Mir son of Ghulam Ahmad Mir of Konan, Bandipora has allegedly duped over 600 aspiring job seekers in Kashmir by minting crores of rupees from them.

Mir, who is running a private school namely Generation Next in Konan, Bandipora and a job consultancy firm with offices in Srinagar, Jammu and Mumbai, had promised unemployed and highly qualified youth dream jobs but he has duped over 600 aspirants, including 150 students from J&K, of crores of rupees.

As per the candidates, Mir is cheating the unemployed youths by posing that they had licensed/authorised agents to carry on the business of recruitment for providing jobs.

A group of job seekers in Kashmir duped by Mir said, “Mir had provided his State Bank of India account number where all aspirants deposited the amount. We were supposed to get visas.”

The aspirants were asked to submit their qualification certificates and passports at various branch offices of the job consultancy in November last year. However, after submission of the documents, Mir used dilly-dallying tactics and asked the aspirants to prepare their medical certificates.

“Even after completion of all formalities, he told us that he required some time, and later started avoiding our calls,” they said.

Mir had earlier promised job seekers in Kashmir better placements in top companies in UAE and had given them a list of these companies. But afterwards Mir switched off his phone leaving the aspiring candidates high and dry.

The incident with these unemployed youth has happened at a time when Kashmir is battling with growing unemployment, with hundreds of educated youth moving to different places especially to Middle-East countries for jobs every year to support their families.

He sent hundreds of innocent people to Dubai for job by giving them a visiting visa. However, some job aspirants managed to return with great difficulty to their native places from UAE and Saudi Arabia after paying Rs. 1 lakh by each aspirant towards Mir.

One aggrieved candidate, Bilal Ahmad while losing his patience said that Mir is a devil, who ruined their career. “He promised us high salaried jobs in Saudi Arabia and UAE but the fact is he doesn’t have any link to any registered office or any other channel. Basically, he is fraudster who looted us openly,” he said.

He further added that Mir demands 1.5 lakh for a job in Saudi Arabia. Once the money is paid by the candidate, he brings them to Mumbai where they roam for several months and then move back home with all their dreams shattered.

Another candidate who has been sent to Mumbai by Mir’s consultancy said that currently they are almost 13 candidates in Mumbai and all are running out of money now. “We are just roaming here. The agent, without any care, is busy with making love with his third wife in Jammu.

The story of Haji Ghulam Mir doesn’t end here. Rashid Ahmed, a computer engineer, who couldn’t find a job in the valley, finally decided to move to Saudi Arabia, was also lured by Mir.

When contacted, Mir didn’t bother to pick up the call. Repeated attempts to contact him proved futile.