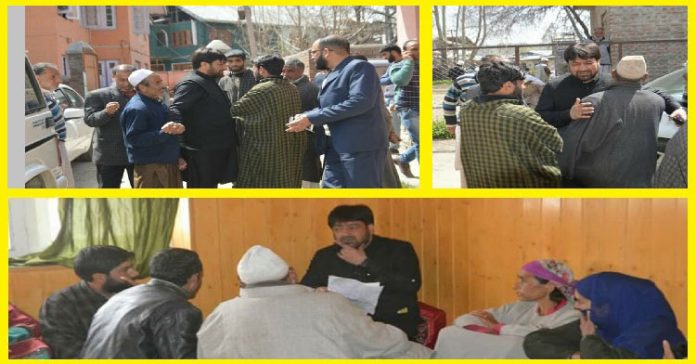 Budgam: To listen to the grievances of the people of his constituency, State Youth General Secretary of PDP and Vice Chairman JK Cements Limited, Er Nazir Yatoo visited Charar-i-Sharief.

Er Nazir Yatoo addressed several gathering where people from adjoining areas apprised him about various problems faced by them.

In his address, Yatoo said the government is steadfast on commitments and promises made to people and is working on the agenda of good governance besides providing basic facilities to the people.

During the visit, Er Nazir Yatoo met several deputations and listened to their grievances and demands. He assured them that their genuine demands would be taken up at the earliest.

Later, Yatoo also visited the Charar-i-Sharief’s main town where people had observed a shutdown against frequent power-cuts and non-completion of Charar-i-Sharief shine.

He assured the protesting people that their demands will be redressed on priority basis at the earliest.

He further added, “The visionary leadership of dynamic leader late Mufti has given new dimension to the policy of PDP to achieve the goal and political stability and prosperity in the region.”

“Present government is leaving no stone unturned so that common man can take a sigh of relief,” he said.