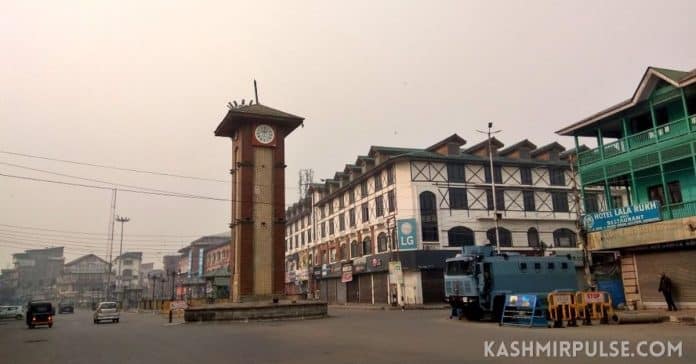 SRINAGAR — A complete shutdown is being observed in Kashmir on Friday to protest the killing of civilians during an alleged encounter in Hyderpora area of Kashmir capital Srinagar.

Reports reaching Srinagar based news agency Kashmir Dot Com (KDC) said that in various parts of Kashmir, shops and business establishments remained closed while public transport was seen thin on the roads. The separatist leadership led by Mirwaiz had given a call for strike over civilian killings in Hyderpora.

Officials said heavy deployment of the security forces has also been made at all the sensitive points to prevent any law and order problem.

Similar reports of a shutdown were received from other district headquarters of Kashmir as well.

In a statement, APHC while terming the Srinagar gunfight as staged said that the tragedy that has struck the families of innocent civilians killed is so tormenting that its pain has stunned the people of Kashmir.

“APHC regrets that as most people’s leadership and political activists are either in jails or under house detention, to protest such inhumanity, and in solidarity with the devastated families of the slain civilians, people should observe a shutdown on Friday, 19th November, on their own,” the statement by the resistance group said.

Following the pressure on the administration by the protest of the families and political parties, the bodies of Muhammad Altaf Bhat and Mudasir Gul were returned to the families around 1 AM amid forces’ presence and were accordingly buried in their ancestral graveyards in Srinagar.

The Jammu and Kashmir administration has called for a magisterial probe into the killings and asked for a report to be submitted within 15 days.