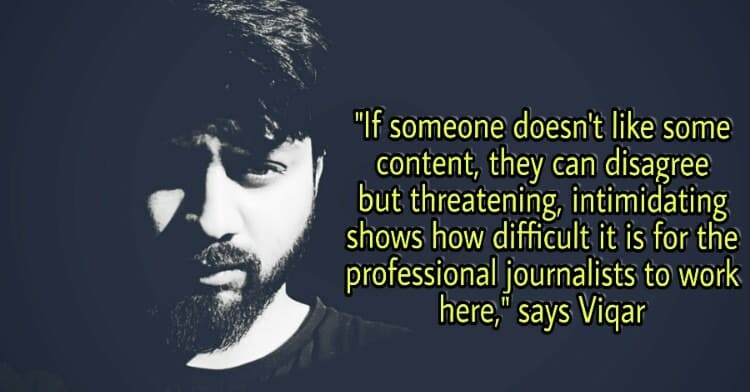 Srinagar: A Srinagar based journalist working for Morocco World News has been receiving threatening phone calls from unknown people. The Kashmiri journalist is now scared of moving out freely to discharge his professional duties.

“On 31 July, in the wee hours of the morning, an unknown person called me via Skype. The person hurled abuses and threatened me of dire consequences,” Peer Viqar Ul Aslam said.

The journalist further added, “I am not sure why I am being threatened but I am highly concerned about my safety after these threatening phone calls.”

Peer Viqar Ul Aslam has about 32,000 followers on his Facebook page and he keeps posting news stories and videos that receive millions of views and are widely shared by the people.

“If someone doesn’t like some content they can disagree but threatening and intimidating shows how difficult it is for the professional journalists to work here,” added Viqar.

On Wednesday again, Peer Viqar received a call from an unknown person inquiring about a video that has been viewed more than 4 lakh times and shared 3000 times.

The journalist explained that he shares videos for informational purposes only and has no ulterior motives but the caller kept on asking questions in an intimidating tone.

Viqar said that he told the caller that it was the right of the people to have information and it is the responsibility of the journalists to provide that information.

“All the callers sound non-local which is alarming for me, and I fear to travel outside Kashmir to any other state. Sometimes it feels they know everything about me which is spooky,” exclaimed Viqar.

According to the journalist, he has been getting death threats on his Facebook page and now followed by the calls continuously threatening him. In one of the calls, the caller, before he hung up the call, said, “Just wait, I will teach you a lesson.”

Peer Viqar Ul Aslam is an independent journalist who has been involved in numerous humanitarian works and developmental stories promoting state tourism through his social media handles.

A Srinagar based senior journalist, pleading anonymity, said, “The professional journalist fraternity feels threatened and this shows how risky it is to work in Kashmir. I hope no harm reaches this journalist and the government takes strong cognizance of such incidents.”

Meanwhile, Peer Viqar said, “I have the call recordings and I am thinking of registering FIR with the police. I am a responsible journalist and a law-abiding citizen.”

“In view of the death threats, I have been forced to shut down my social media accounts,” Peer Viqar revealed.