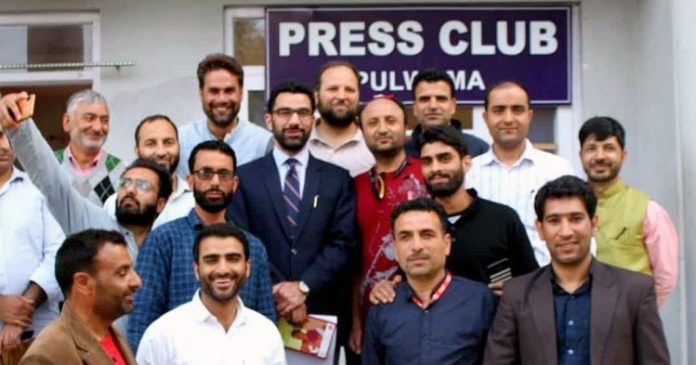 The Press Club was inaugurated by Deputy Commissioner Pulwama, Syed Abid Rasheed Shah in presence of various other officials and journalists.

On the occasion, Syed Abid Rasheed said that the aim of the club is to unite journalists to discuss and share matters of common interests to create a healthy and peaceful environment in surroundings for the enrichment of better society.

DDC urged the journalists to highlight education, health, water and other basic issues in media.

He hoped that the club would work as a bridge between the common people and the administration and sort out various issues through the efforts of working journalists of the District.

He said that Press Club will facilitate local journalists for the promotion of the Central and state sponsored welfare schemes for the general masses.

DDC said that there will be full support from the administration to the journalists while discharging their duties.

On the occasion, media persons raised their demands including establishment of a broadband connection, library and renovation of rooms and washrooms. DDC assured that all requisite facilities will be provided as early as possible.

In a statement, PWJA said that the Press Club for working journalists of Pulwama will go a long way in strengthening the resolve of journalism fraternity in the district.

“The president of PWJA and its executive body express sincere gratitude to all who made the establishment of this Press Club a reality. We are especially thankful to DC Pulwama, Syed Abid Rasheed,” PWJA said.