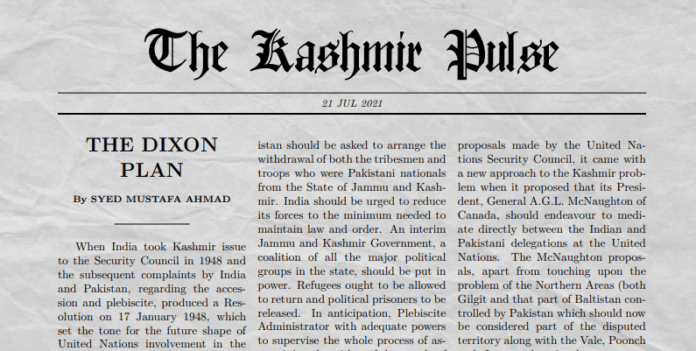 When India took Kashmir issue to the Security Council in 1948 and the subsequent complaints by India and Pakistan, regarding the accession and plebiscite, produced a Resolution on 17 January 1948, which set the tone for the future shape of United Nations involvement in the dispute, the United Nations was simply offering its services as an honest broker to sort out a quarrel between two parties whose relationship could almost be described as ‘domestic’ Alastair Lamb wrote in his book “Kashmir: A Disputed Legacy (1846-1990).

The First Security Council Resolution on Kashmir did no more in effect than urge the disputants to get together and sort out their differences without making a public nuisance of themselves. After the First Resolution, it was followed by the formation of United Nations Commissions for India and Pakistan (UNCIP) with three members from States represented in the United Nations, one selected by India, one by Pakistan and the third jointly by the other two.

With instructions amplified by a Security Council Resolution on 6 February 1948, it was authorised to investigate the situation on the spot, endeavour to help India and Pakistan to bring about law and order in the State of Jammu and Kashmir and then try to arrange for a plebiscite to decide the future of the state. Its role from the outset was that of a mediator rather than enforcer of international law.

The original proposals for the UNCIP were greatly strengthened on April 21 1948, when a further Resolution emerged from the Security Council. The UNCIP was increased to five members. It was to make specific recommendations to the two parties in the dispute. Pakistan should be asked to arrange the withdrawal of both the tribesmen and troops who were Pakistani nationals from the State of Jammu and Kashmir. India should be urged to reduce its forces to the minimum needed to maintain law and order. An interim Jammu and Kashmir Government, a coalition of all the major political groups in the state, should be put in power. Refugees ought to be allowed to return and political prisoners to be released. In anticipation, Plebiscite Administrator with adequate powers to supervise the whole process of ascertaining the wishes of the people of the state.

The UNCIP reached the subcontinent in July 1948 and after talks with Indian and Pakistani leaders, on 13th of August, it produced its detailed plan of action. It called for a ceasefire to be followed immediately by the opening of negotiations for a truce agreement which would involve the withdrawal of the Pathan tribesmen and other Pakistani nationals – UNCIP, much to Nehru’s annoyance, was very careful not to pass any moral judgements on the Pakistani side – followed by the withdrawal of the Indian forces. Once the truce agreement was signed, both sides could start working out the arrangements for a Plebiscite.

A feature of the UNCIP plan was the creation of a United Nations military presence in the disputed territory. Its function was mainly to observe and to report back to the United Nations Secretary General any violations of the ceasefire and it consisted of professional soldiers from member states of the United Nations commanded by a General Officer as Chief Military Observer. From the early days of the Kashmir dispute, therefore until today, there has always been a direct physical United Nations presence in the state of Jammu and Kashmir on both sides of the ceasefire to remind the various parties involved that the outside world is watching what goes on.

ALSO READ
At Eidgah, Mirwaiz says peace can't be created in a vacuum

In December 1949, when both India and Pakistan had rejected the proposals made by the United Nations Security Council, it came with a new approach to the Kashmir problem when it proposed that its President, General A.G.L. McNaughton of Canada, should endeavour to mediate directly between the Indian and Pakistani delegations at the United Nations. The McNaughton proposals, apart from touching upon the problem of the Northern Areas (both Gilgit and that part of Baltistan controlled by Pakistan which should now be considered part of the disputed territory along with the Vale, Poonch and Jammu, but in the run-up to the plebiscite should remain, subject to United Nations supervision, under the control of the local authorities, that is to say the current pro-Pakistani administration), modified somewhat the UNCIP position on the demilitarization of the State.

A distinction was now drawn upon between the forces of Pakistan and those of Azad Kashmir. While the Pakistan regulars should be drawn entirely, the Azad Kashmiri troops should merely be ”reduced” by disbanding.

The McNaughton plan was rejected and was received with a measure of interest by Pakistan but rejected by India on the grounds, in effect, that it implied a legitimization of the concept of Azad Kashmir. Thus, the McNaughton mediation can only be described as a failure. It did give rise, however, to the appointment of Sir Owen Dixon, a distinguished Australian jurist, as a United healthcare Representative, in India and Pakistan, with many of the functions and powers of the UNCIP.

After a strenuous tour of the State of Jammu and Kashmir between late May and late August, 1950 and on the basis of long discussions with both Liaquat Ali Khan and Jawahar Lal Nehru, separately and jointly, Sir Owen Dixon presented his report to the United Nations on 15 September, 1950. It is a fascinating document, one of the very few pieces with claims to a measure of literary elegance and with to emerge from the sorry Kashmiri story. He concluded that it was extremely unlikely that any proposals for a plebiscite of the kinds and under the circumstances, which the UNCIP had suggested or might suggest on the basis of anything already on the table, would ever bear fruit.

Dixon, with all the factors in mind, decided to explore a fresh approach to the entire problem face to face with the two Prime Ministers, Nehru and Liaquat Khan, whom he managed to persuade to meet with each other in New Delhi between 20 and 24 July, 1950. Dixon now advanced what came to be known as the idea of “regional plebiscites”. It was either: “a plan for taking the plebiscite by sections or areas and the allocation of each section or area according to the result of the vote there in. Or, a plan by which it was conceded that some areas were certain to vote for accession to Pakistan and some for accession to India and by which, without taking a vote there in, they should be allotted accordingly and the plebiscite should be confined only to the uncertain area, which…. appeared to be the Valley of Kashmir and perhaps some adjacent country.”

The Indian reaction was to look with interest at the second plan. The following refinements emerged during the course of subsequent discussion between Dixon and the Indian side. There would now be only one regional Plebiscite. The State of Jammu and Kashmir would be divided into four main regions, Jammu, the Valley of Kashmir in its entirety (including the Muzzafarabad area in Azad Kashmir) and finally the Gilgit Agency and its dependencies along with Baltistan.

It would seem that the bulk of those districts of the old Poonch Jagir and Jammu which were now on the Azad Kashmir side of the ceasefire line would remain with Pakistan and not form part of the proposal. Of these four regions, two, Jammu and Ladakh, would go uncontested to India and one, Gilgit, Baltistan and the rest, what for inconvenience was now referred to as the Northern Areas, would go to Pakistan without further argument. In the Vale of Kashmir, however, a plebiscite would be held to decide if its future would lie with India or with Pakistan (the option of Independence does not seem to have been contemplated by Dixon at this time). There would then be an Indo-Pakistani boundary Commission to demarcate the new borders.

There were many obstacles in the peaceful settlement, both from Pakistan and India. India called Pakistan “aggressor” while Pakistan blamed India for other mismanagements. At this moment of arguments and counter arguments, Sir Dixon left the subcontinent on 23 August, 1950 with the concurrence of both Jawahar Lal Nehru and Liaquat Ali Khan, that “there was nothing further that could do now”.

In his report to the United Nations, he observed: “the State of Jammu and Kashmir is not a unit geographically, demographically or economically. It is an agglomeration of territories brought under the political power of one Maharajah. That is the unity it possesses. If as a result of an overall plebiscite the State as an entirety passed to India, there would be larger movements of Muslims and another refugee problem would arise for Pakistan, who would be expected to receive them in very great numbers. If the result favoured Pakistan, a refugee problem although not of such dimension would arise for India, because of the movement of Hindus and Sikhs. Almost all this would be avoided by partition. Great areas of the State are unequivocally Muslim. Other areas are predominantly Hindu. There is a further area which is Buddhist. No one doubts the sentiment of the great majority of the inhabitants of these areas. The interest of the people, the injustice as well as the permanence of the settlement and the imperative necessity of avoiding another refugee problem, all point to the wisdom of avoiding partition as the principle of settlement and abandoning that of an overall plebiscite. But in addition, the economic and geographic considerations point in the same direction.“

After the failure of the Dixon Plan, there came Frank Porter Graham with his own plan. However, like the Dixon Plan, it ended without leaving any long lasting effect on Kashmir issue. All the intellectuals failed in the peaceful settlement of Kashmir issue, due to one reason or another. United Nations has not been able to implement what it believes in. At the present, plebiscite is quite difficult.