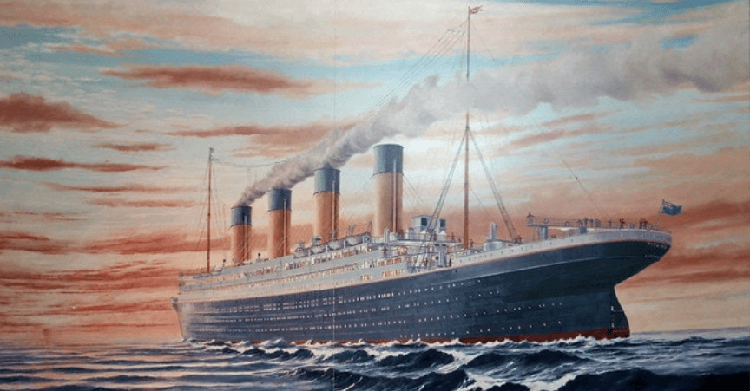 By a sunny day of an April sunshine, embark the Titanic on premiere
Voyage, through the buoyancy of an un-horizoned Atlantic:
Slicing, supreme and stalwart, scaling and smashing,
Through the spectacular heart of aquamarine ocean.

Met a disastrous fortune beneath the dark of an ominous month’s
Fortnight, an Icarus launch’d from hubris down to the sublimation
Of a sea, when contrast with an iceberg, the whole empire of ship’s
Mechanism, redound into the dysfunction of backlash.

Moment on, does not return back to vie with tornados, geyser
And cyclones of ocean. Delve unfathomably deep to the dungeons
Of blue aquarium: absorb in the heart of a la Niña-Atlantic.

Now, aquatic denizens dispose onto the brass ledges of Titanic.
Once, admirably grand and an adorably gigantic,
Currently under the circumstances of leviathan Atlantic.

Oceanographers; the doctors of Ægæan science, found the hull:
Skeleton of the ship un-hauled, of so score years, in an archive of
Aqua, an intact architecture, divided into two; prow and a stern.

A tincture of pale ailment, coiled all abreast – the turquoise fungi,
Proffering forth the grotesque portrait of a baroque rococo:
Like the castle of Walpole’s “Castle of Otranto”.

[Aquaria confirms a trepidation in the sluices of my nucleus]: the
Fluttering pendulum of my heart cawing like the raven of night.
Last voyage of first-time sailed sea ship – first draft and so long
An account, none can account.

The vessel was not structured by the shade of an eclipse,
As the ship of Lycidas, under the umbrage of …
Immerse everlastingly; lost in the heart of a museum Atlantic,
Appeared, never again, over the surface of the cobalt waves.

The lives still reposed as the patients etherised by a compound,
Abiding for the cut of a scalpel to dissect them loose
From the slumber of an ocean aquatic-anaesthesia.
Perishing of the sort inundate the gush of horror in hearts,
Mind perplex and something delicate tremble in fear.

The relating from mouthpieces; narration or, the replica out of art:
The painting fountains the temper of horrid gloom.
O Lord! What hast thou done?
Thou the Captain of Olympus Argosy! The Universe, helming
Through the ebullient waves of ferocious mediterranean.

Thou art the master of art and destiny – the shipwreck and shrieks!
The liner was carrying the pair of star-crossed birds,
Overpowered by the fabrics of portent destiny,
Thus, saturate perennially in the ocean of love;
Engulfed ponderously by the hungry tides of Atlantic.
Myriad, appeared the staple victual to the sulphured-bottom leviathans.

Majority of drowners were the class, being of chimney sweepers,
Tortured scathingly by the lances’, lashes of arrogant minds.
So sublimely was made the argosy,
Not less than the stadium of Olympia,
The marvel of adroit engineers and dexterous hands.

Was fraught with the items of cosmopolitan supply.
Some drown by the buffoonery, others by the infatuation of heart.
Except the application of aristocracy, scanty escape through trick,
Some had a grip by the cruel combat.
Rest bourgeois and proletariat run aground together,
To the ground of bottomless lapis lazuli aquarium.