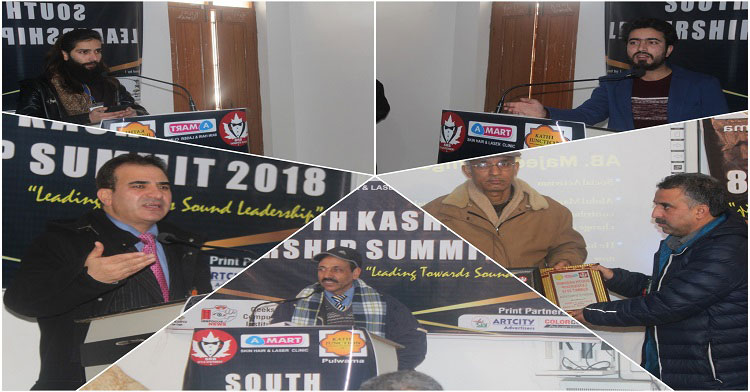 Chairman Rahim Greens, Abdul Hamid Bhat was the chief guest of the event who shared his ideas and experiences on the occasion.

Speaking with The Kashmir Pulse, organizer Shahid Rashid Bhat said that the event was an effort to give recognition to those people of south Kashmir who have been instrumental in their respective fields and have been contributing positively towards the society.

“Actually, the idea behind organizing this event is to identify and felicitate our unsung heroes whose success stories have the potential to inspire more and more people to excel in the fields of their choice,” said Bhat Musaddiq Reyaz, one of the co-organizers.

“The event was aimed not only to felicitate the achievers of south Kashmir but also to encourage and inspire other people who feel reluctant in chasing their dreams,” Syed Abdul Mohsin Andrabi, another co-organizer of the event said.

The event, first of its kind in Pulwama, generated a lot of excitement among the audience which was mostly comprised of youth.

Those who were awarded in Social Activism include Abdul Majeed Gamgeen, Mohammad Yaseen Shah, Bashir Ahmad Gulzarpuri and Mudasir Hassan.

Those who were felicitated in Social Innovation category include Mashek (NGO), Zeyan Shafiq, LADISHA (App) and Ehsan Kudoosi.

Issac Hassan, Shah Irshad Ul Qadri, Younis Khaliq and Dr Arshad Hussain Wani were also given awards as an appreciation for their work.

“Government Degree Collge Pulwama is always happy to collaborate in such events which are youth oriented and such programs should be organized on large scale. We have no dearth of youth who are ready to give their best in any field and these type of events groom them and support them morally,” Principal, Government Degree Colege (Boys) Pulwama, Dr. Bashir Ahmad Mir said.

“There is no scarcity of people who are ready to sacrifice any dearest thing for the social cause and are beacons of light for subsequent generation but their inspiring efforts and contibutions need to be recognised in a deserving manner,” Chairman Rahim Greens, Abdul Hamid Bhat said.

A music band, composed of two boys, enthralled the audience during the event with their melodious Kashmiri songs.

While extending his thanks to the sponsors, Shahid Rashid said, “This recognition would certainly encourage and inspire people in strengthening their resolve to become as an ideal and promote legacy of human self-realisation and social responsibility. We are thankful to all our sponsors including A-Mart Pulwama, Kathi Junction Pulwama, Cosa Nostra Cafe Shopian and Print Partners, Art City Advertisers & Color Curve Advertisers”.