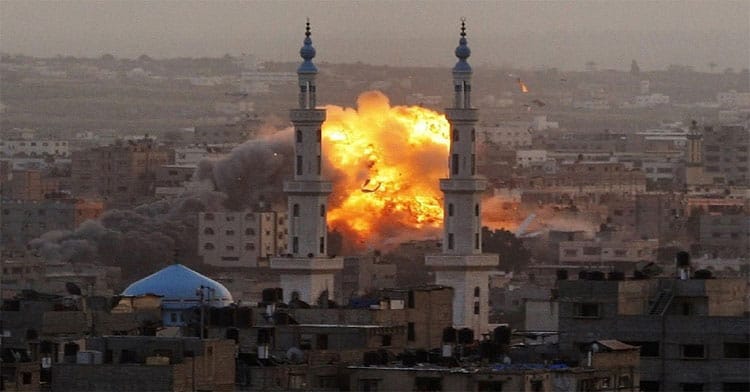 The Syrian uprising to dethrone the autocratic ruler tests the mettle of both Assad and the rebels, but evidently worst sufferers are neither but the innocent unarmed civilians with none at the receiving end.

The Syrian crisis can’t be attributed to a binary of sectarianism but religious demography conjugated with lack of freedoms and economic woes drove resentment of the Syrian government, the hard-handed crackdown on protesters rankled the public.

It all started when a boy of age 13 was killed after having been brutally tortured for writing graffiti in support of Arab Spring along with 14 more boys that toppled the rulers in Tunisia, Egypt, Libya and Yemen.

The demonstrations and protests in the beginning were mostly non-sectarian but the armed struggle surfaced the starker sectarian division with Sunni making the majority and the establishment being dominated by Alawite sect of which Assad is a member.

The involvement of international actors taking advantage of the hostile demography further drifted the regime into mayhem thereby intensifying polarization and biases, thus limiting the scope for Unified Arab State as envisioned by pioneers of Ba’athism (Michel Aflaq, Zaki al-arsuzi and Salah-ud-din Bitar).

The principles on which the Syrian Baath party that espoused Ba’athism is based, were strictly secular and proposed for a merger of state-led economy with pan Arab nationalism, but the ideology under leadership of Assad is reduced to an empty shell, discredited by lost wars with Israel and crippled economy with failure of Chinese model invoked by the regime.

ALSO READ
Syrian conflict and the damage it inflicted on Palestinian cause!

The concentration of power in few hands with dashed hopes of reform. One party system left few channels for political dissent, with no peaceful transition of power since 1950s, popular uprising was inevitable.

The reforms in economic hybrid model with socialistic bias that opened the doors for private investment favored none but the aristocrats with politically biased inclination, thereby infuriating the lower middle class.

Global warming is yet another attribute that aggravated the 2011’s uprising. Severe droughts from 2007-2010 plagued the Syrian economy, causing migration of nearly 1.5 million from countryside to cities, exacerbating poverty and social unrest.

State violence that killed over 4,65,000 Syrians, injured over a million and displaced nearly half of Syria’s pre-war population (12 million) is a brunt doomed to fail the regime.

The advocacy of vanguardism over progressivism in the absence of political pluralism in the states inflicted with wars consolidate the power in limited hands and pave way for anarchism as happened with Saddam Hussain’s Iraq and results only in authoritarian debacle. The monopoly of Alawite’s rule in the Sunni dominated state has also added to the tension in the religiously mixed area (e.g. city of Homs). Though it wasn’t the driving force for the uprising but it also contributed its own share in the violence.

The governments of majority-Shia Iran and Iraq, and Lebanon based Hezbollah rendered their support to Assad while Sunni-majority countries including Turkey, Qatar and Saudi Arabia supported the Anti-Assad rebels.

The US being critique of the Assad regime began a covert programme to support and train the rebels but later on shut down the programme after realizing CIA had spent $500M but trained only 60 fighters and then in April 2017, carried military strike against government forces, launching 59 Tomahawk cruise missiles on the base from where chemical attack on Khan Shaykhun had been launched.

Russia being the biggest supporter of Assad regime rendered its support in every dimension including military equipment supplies and even vetoed (along with China at UNSC) the Western-backed resolutions on Syria.

Free Syrian Army (FSA), a loose conglomerate of armed brigades formed in 2011 by defectors from Syrian Army backed by several international players including Turkey, US and several Gulf countries has now limited presence in the Northwestern parts of the country.

ISIL / ISIS emerged as the most powerful opposing army in 2014, controlling more than Syrian government itself. ISIS is Shia-phobic and incremented the sectarianism.

Hezbollah backed by Iran rendered its support to the Syrian Army.

Implications of the Civil War

As per World Bank’s report, 7% of housing stock was completely destroyed and 20% partially damaged as of early 2017. From 2011 until the end of 2016, the cumulative loss in gross GDP has been estimated at $226 Billion, about four times the Syrian GDP in 2010. Loss of human capital is estimated nearly 4,65,000 people who have died in the conflict.