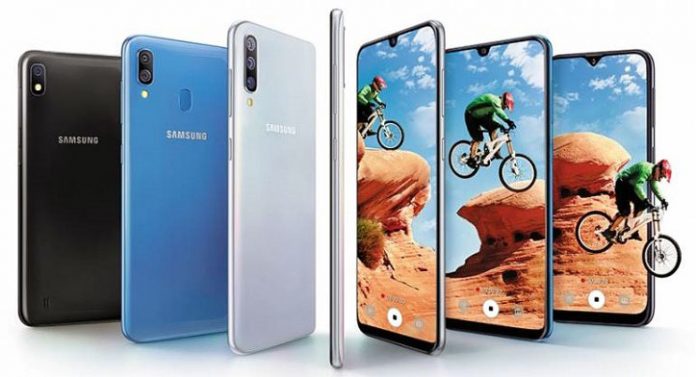 NEW DELHI — After launching Galaxy M30 smartphone in India on Wednesday, South Korean device maker Samsung has introduced the Galaxy A smartphone series in India. The series comprises of three smartphones – Galaxy A10, Galaxy A30 and Galaxy A50.

The Galaxy A series is Samsung’s bet to compete with Chinese brands like Oppo and Vivo in the mid-budget smartphone category. All three phones run on the Android Pie based Samsung One UI.

The Galaxy A10 is the budget variant smartphone in the A-series lineup. It features a 6.2-inch HD+ Infinity-V display with a resolution of 720*1520 pixels. It comes with an octa-core Exynos 7884 SoC paired with 2GB RAM and 32GB onboard storage. The storage can be expanded to up to 512GB.

The phone comes with a 3,400 mAh battery. For security, the phone has face unlock feature. The device will be available in three colours – black, red and blue.

The second phone in the A series lineup is the A30. The smartphone sports a 6.4-inch Full HD+ Super AMOLED Infinity-U display which has a resolution of 1080*2340. It is powered by an octa-core Exynos 7904 SoC paired with 4GB RAM. The smartphone comes with 64GB of internal storage that can be expanded via microSD to up to 512GB.

In optics, the phone has a dual rear camera setup that includes a 16MP sensor with an f/1.7 aperture and a 5MP sensor with aperture of f/2.2 . At the front camera, there is a 25MP lens with f/2.0 for selfies and video calling.

The phone has a 4,000 mAh battery that supports fast charging and also includes a fingerprint sensor on the back.

The Galaxy A50 is the higher end smartphone with premium features onboard. It has a 6.4-inch FHD+ Infinity-U Super AMOLED display (1080*2340 resolution). The phone has a high screen to body ratio of 91.6 per cent. It is powered by an octa-core Exynos 9610 SoC paired with 4GB and 6GB RAM options. It comes with 64GB onboard storage and is expandable to up to 512GB via microSD.

The phone has an in-display fingerprint sensor for secure unlocking of the device. It also has Samsung’s Bixby AI vision feature. The phone has a 4,000 mAh battery which supports fast charging and comes along with a 15W charger.