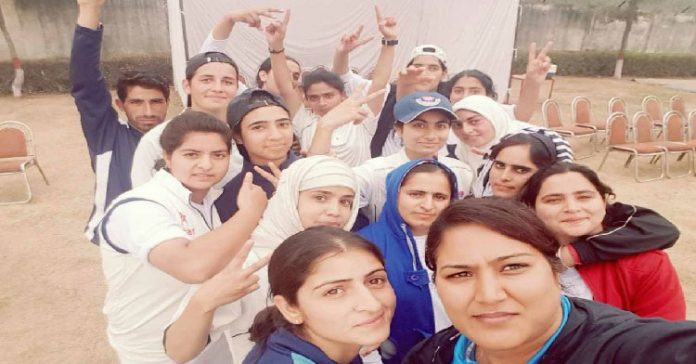 Ambala: Kashmir University’s Women Cricket Team on Thursday made a thrilling entry into the North Zone Inter-University Tournament by sealing a victory against host team with a huge margin of 270 runs in the inaugural match.

Kashmir University won the toss and elected to bat and scored a huge total of 335 on the scoreboard.

Sheeraza scored 38 runs, Adfar Hamid scored 35 runs while Sayima Ahad scored 30 runs, thus pilling up a huge total on the scoreboard and built a pressure on the host team.

The host team succumbed to the pressure built up by the Kashmir University batswomen which was continued by the bowlers of the team.

Irfana Ahad’s and all-rounder Asra Shafi’s outstanding bowling crumbled the host team at just 65 runs in the 18th over. Irfana took 5 wickets for just 15 runs while Asra Shafi took 3 wickets thus destroying the batting line of the opposite team.

Asra Shafi was adjudged as the Women of the Match for her outstanding performance in batting as well as bowling.

Earlier, the 50 over match was sliced to 40 overs as match was started an hour late owing to heavy fog and low visibility.

Coach of the team Sakeena Akthar, who is accompanying the team, said the match win by a huge margin will boost the morale of the team and will help them in putting pressure on opposite teams in the coming matches. She said the players are working hard and practicing continuously to face any challenges.

The team will play its next match on 18th of this month. Meanwhile Director Physical Education and Sports, Kashmir University Nisar Ahmad Rather congratulated the players and the coach of the team on sealing the first victory in the tournament. He further urged the team to practice hard for the next game against Kurukshetra University. (KNS)