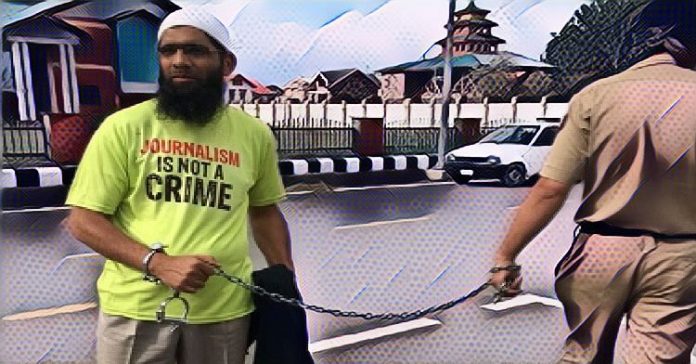 WASHINGTON — The US National Press Club called on Indian authorities on Monday to release a Kashmiri journalist who has been jailed for two-and-a-half years.

Aasif Sultan, a journalist with the monthly magazine Kashmir Narrator, was detained by Jammu and Kashmir Police in August 2018. He was charged the following February for allegedly harbouring militants.

The National Press Club lambasted the charges as “unwarranted,” saying the only thing Sultan “had done was interview and write about” the militants.

Ahead of his next scheduled court appearance on February 26, club President Lisa Nicole Matthews, and National Press Club Journalism Institute President Angela Greiling Keane said the fact that he remains in prison “is simply wrong.”

“All he did was his job,” the club leaders said in a statement. “On behalf of journalists everywhere, we say: it is past time for Prime Minister Narendra Modi to do what is necessary to allow Mr. Sultan to rejoin his family.”

Sultan wrote a cover story for the Kashmir Narrator magazine in July 2018, detailing the rise of young militant commander Burhan Wani, who was killed by Indian forces in 2016.

Following his arrest, the Committee to Protect Journalists said Jammu and Kashmir Police have reportedly subjected Sultan to repeated interrogation during his detention, asking him to reveal his sources and “why he reported on the conflict in Kashmir.”

“Interviewing or having sources who are critical of the government is within the scope of a journalists’ job and does not implicate them in a crime. Reporting on an important and newsworthy story such as the conflict in Kashmir is a public service, not a criminal act,” the committee said in a 2019 letter.

Kashmir, a Muslim-majority Himalayan region, is held by India and Pakistan in parts and claimed by both in full. A small sliver of Kashmir is also held by China.