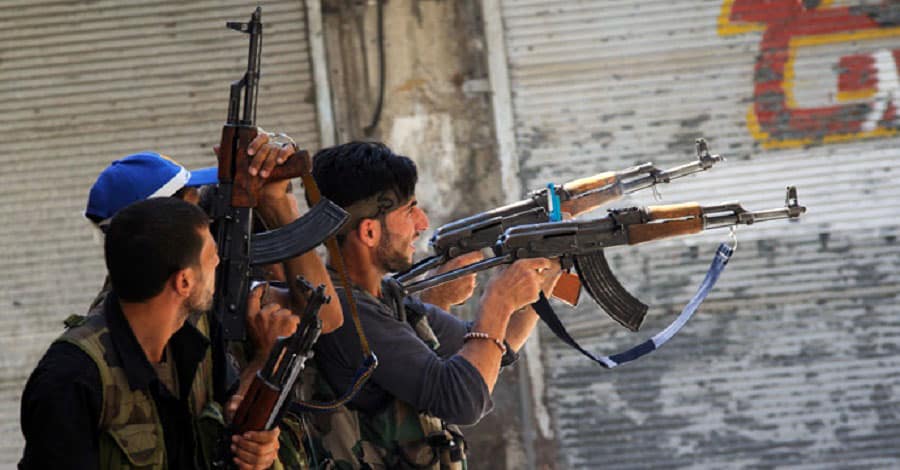 East Ghouta, the countryside of capital Damascus, which is being held by multiple terror groups since 2012 has become the talk of all media outlets these days. It’s good that the international community has woken up from the deep slumber on East Ghouta, albeit too late. They would have done it when the foreign backed terrorists came from 100 odd nationalities and occupied East Ghouta in 2012.

Minuscule number of people were concerned on the depressing situation of civilians in East Ghouta during these turbulent years when terrorists unleashed the reign of terror there. The newly entrant drum beaters on East Ghouta, who were absent from the scene when terrorists were beheading, raping and brutalizing the innocent souls there, have suddenly become well wishers of the people of East Ghouta.

They never uttered a single word when terrorists in East Ghouta were using civilians as human shields. They never expressed concern when terrorists were firing mortal shells, missiles and other projectiles towards Damascus, massacring civilians there. They only upped the ante when Syrian Arab Army and their allied forces started an offensive to liberate East Ghouta from the extremists.

Right from the start of this operation, the Western media started a propaganda campaign portraying this development as the attack on the civilians in East Ghouta. They started making headlines like “Besieged East Ghouta under attack”, least knowing that it’s the terrorists who have besieged the civilians there since last 6 years.

The Western media has started the same scenario like they did at the time of Aleppo liberation in December 2016. They are repeating the same propaganda stuff projecting that Syrian forces and their allies are killing children, women besides charging them of chemical attack.

A plenty of images were circulated through different mediums depicting carnage in East Ghouta. Most of these war-torn images are of Yemen, Gaza, Iraq, Egypt, Rohingya, Mongolia which are widely spread mainly on social media to trigger the foreign military intervention against the Syrian government. Even US, UK, France and Britain have threatened to attack Syrian forces on the charges that they have used chemical gas in East Ghouta.

The puzzling thing is why Syrian government would use chemical attack on its own citizens when they have demonstrated in their favour and have expressed their abhorrence against the terrorists who have kept them hostage for a long time in East Ghouta.

Syrian army has recaptured 70% area of East Ghouta from the foreign backed mercenaries. They are in a winning position. Why would they derail their winning streak?

The terrorists are disallowing civilians to leave through the humanitarian corridor by continuously shelling the safe exit routes created by Syrian and their allied forces. But so called Human Rights’ defenders can’t see this stark reality of brutal and inhumane acts of terrorists.

It’s worth noting that the Western media is quoting mainly two sources for their updates on Syria, one is White Helmets who call themselves as Syrian Civil Defense and other is so called Syrian Observatory for Human Rights (SOHR).

White Helmets are funded and backed by US, UK, France and some of their allies. Mostly, they can be seen in terrorist held areas where they work hand in glove with terrorists for their propaganda stuff. They were even seen with terrorists carrying arms and desecrating the dead bodies of Syrian Army soldiers.

Syrian Observatory for Human Rights is wholly and solely run by one man sitting in his cozy room in Britain. He claims that he has his “activists” in Syria who provide him latest updates on Syria but the point to ponder is that these so called activists don’t update him about the brutality and massacre perpetrated by foreign backed terrorists. They only create the fabricated stories from the terrorist held areas so as to garner the world support against the operation of Syrian Army in order to save these terrorists.

Terrorists in Syria are highly trained by their sponsors and have equipped them with sophisticated weapons so it’s not difficult for their backers to provide them with the media propaganda tools. Corporate media is all about money. When you have power then you own corporate media and you can make them dance on the tunes of White Helmets and so called Syrian Observatory for Human Rights.

It’s not a rocket science for those people to create the visual blitz who are quite proficient in making Hollywood movies having the feel and touch of the real life. In fact, one such studio was busted in Egypt during the time of Aleppo liberation in 2016 where they had created the scene depicting the bloodbath in Aleppo to hamper the efforts of Syrian forces then to liberate it.

It’s quite unfortunate that the Western media outlets don’t report on the areas which are liberated from the terrorists like Aleppo. No Western media outlet tried to interview the Aleppo boy Omran Daqneesh who was falsely used by the White Helmets for their propaganda stuff during the time of Aleppo liberation campaign. His father Mohammad Daqneesh revealed that his son was forcibly taken in an orange coloured ambulance to portray him as being injured in a Syrian airstrike which was a complete lie.

Why don’t the Western media visit the current liberated Aleppo to enquire about the plight of people under the occupation of terrorists? Why they have forgotten Aleppo and staged their drama in East Ghouta now. There is every reason to believe that the hue and cry of Western media is not to save the Syrians but the terrorists on whom they have invested billions of petrodollars.

I do accept this fact that innocent civilians get killed in Syria for their no fault. When you have conflict anywhere then collateral damage is unavoidable. When terrorists armed with US, Israeli and NATO weapons attack the sovereignty of your country, then you have every right to defend it and in this process it is admitted that some civilians may get trapped and become victims. But still I strongly recommend that all techniques should be put into place so that civilians are rescued at all costs.

Bashar al Assad, the Syrian president, may have committed some mistakes before the crises started in year 2011 but this is not the real cause which started the Syrian conflict. There is more to it than meets the eye.

He was targeted by America, Israel and their Arab puppets as he was not following their scheme of things in Syria and was the strong proponent of Palestinian cause. They implemented all their resources and channels to topple him in order to get their desired leader in Syria. They funded and backed various terror groups in Syria who brought the death and destruction in whole Syria.

ALSO READ
The Reality of ISIS!

We understand that some Syrians may have hatred for him but that is not the whole population. This is common in all countries. No head of any country is liked by all countrymen. People all over the world have had differences with their leaders.

Western and Arab media projected Bashar al Assad as a brutal ruler so that they attain the support of international community to dislodge him. If we accept the widely said narrative that the so called “moderate rebels” were there to establish democracy, then why they were beheading, raping and brutalizing innocent civilians. Some people even gave the sectarian colour to this conflict least knowing that there are 75% Sunni soldiers in Syrian Arab Army who love Bashar al Assad more than their lives.

The emergence of Iran and Russia in Syria destroyed the evil plot of America, Israel and the GCC and prevented more death and destruction by foreign backed terrorists. The resistance axis of Syrian Arab Army, Iran, Russia and Hezbollah put a strong defiance against the evil intentions of America, Israel, Britain, France and their Arab puppets.

Iran and Hezbollah rendered their services to uproot the tumour of Israeli backed terrorism in Syria as this would have engulfed the whole region including Iran and Lebanon. So they crushed it right from the bud before it would have reached to their territories. Their resistance kept the Palestinian cause intact and the project of Greater Israel was dashed to ground. Moreover, they also protected the religious entities of all religions which were being demolished by terrorists.

The script for Western and Arab media is generated by America and Israel. They confront or support a particular ruler depending on their interests. The way the events in Syria were distorted by these media outlets was only to help the terrorists than the civilians.

Just ponder! Have these media outlets used the same zeal and zest when innocent people are massacred in Yemen, Bahrain, Palestine, Afghanistan, Pakistan, Libya, Rohingya, Iraq, Nigeria and in other parts of the world. They don’t even highlight the killings of innocent civilians of Iraq and Syria in US airstrikes.

No one is spreading the hashtags to save the population of Afrin in northern Syria who are being butchered by Turkish forces. Why this negligent approach when it comes to the miserable plight of civilians who don’t fit to their propaganda campaign. The early we decipher it, the better it will be for the world peace.