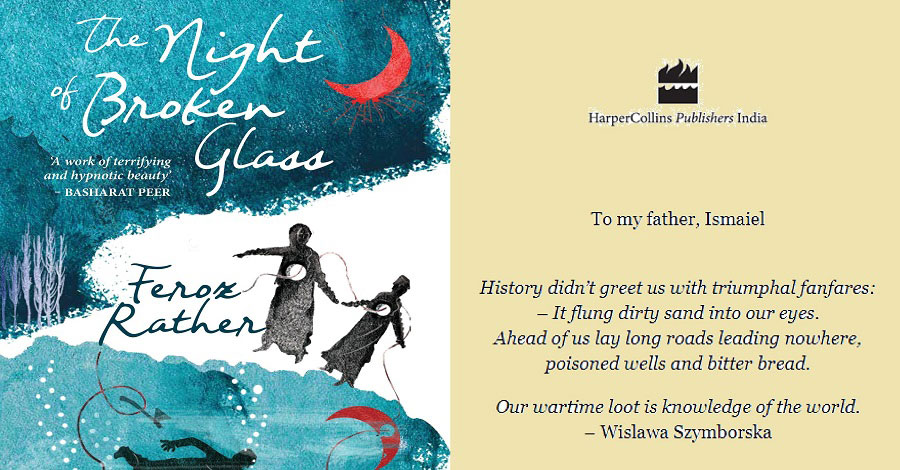 Reading about conflict, horror and terror from a distant land is one thing, and the angst of growing up in a conflict zone and then writing about it is completely different. From the bruised land of Kashmir painted with blood and tears, a new writer is there on the scene, portraying the tale of suffering, rape, rebellion and suppression with exuberance and excellence.

Among other writers from the valley like Basharat Peer, Mirza Waheed, Shahnaz Bashir and others in the queue, we have Feroz Rather’s debut novel, “The Night of Broken Glass” making its mark on the literary canvas. The book has been published by Harper Collins India, casting the book as their “lead literary fiction debut of the year” and calling the book as “one of the first books in Kashmir dealing with insurgency.”

The book has been applauded well by established writers. Siddhartha Deb writes about the novel, “A haunting and mesmerizing debut novel that announces the arrival of a major new talent”. Praising the novel, Kashmiri novelist Mirza Waheed says, “Extraordinary, haunting debut.” Praising it in his blurb, “The dazzling characters that inhabit The Night of Broken Glass will stay with you for years after you have finished reading this stunning collection. Bravo!” Kashmiri journalist and writer Basharat Peer calls it “a work of terrifying and hypnotic beauty.”

Rather’s novel, ‘The Night of Broken Glass’ (Kristallnacht) bears its title from the events of Germany of November, 9-10, 1938 which is referred to as the beginning of Holocaust. “In that night of Nazi-fueled hatred, 267 synagogues, stores and homes along with the killing of almost 100 Jewish people on the direction of Nazis were just the tangible portion of the damage”.

The same events which recur almost every day in Kashmir are depicted dramatically by employing visceral imagery and gripping symbols. Divided into 13 Chapters/Stories, Rather brings forth the vulgar and inhuman acts of criminality, which grow every day to annihilate the people of Kashmir.

In the novel, Major S and his group, engaged in violent and inhuman activity, leave the people of valley cloyed with terror and trauma.

In 13th chapter of the novel, Gulam, a cobbler by profession, who never finds his son’s bullet-riddled body, narrates the tale of trauma and brutality operated by Major S, who in his acts of brutality bears very close semblance with Hitler.

“On the highway outside the camp and the bridge where the bodies had fallen, he (Gulam) desperately searched for his son’s body.”

As on the day of German Holocaust, Jews were killed brutally on the direction of Hitler, similarly in the novel, on directions of Major S, fifty-six innocent boys of Bijbyor are brutally killed.

“Even the blood has been washed away by the rain that fell that afternoon soon after Friday prayers, and all that remained were the shoes, abandoned and scattered. He did not see even a single corpse then, not one out of fifty-six.”

Like that of shreds of broken glasses in German Holocaust, the utensils are being smashed by Major S in the house of Syed Anzar Shah. And Rosy, beautiful daughter of Anzar Shah is raped by Major S. Her only fault is being a Kashmiri and being a would-be bride of Jamshid, who is the friend of Showkat, commander of the rebels.

While enquiring about Jamshid, “Major S grabbled Rosy, who was trying to wriggle out through the window. He cupped her cheeks with one rough hand. Jamshid’s bride! he jeered. He f***s you every night. You must know where he is.”

In his novel through inter-connected stories and visceral imagery, Rather shows that living under occupation is like living under the shadow of death which affects both animate and inanimate equally. The characters in the novel while attempting to break free the shackles of bondage have shock and fear on the face and look equally in eyes of death.

ALSO READ
Riding The Tide by Ashok Bhargava is no less than a powerful anti-dote!

Although, the theme of conflict and its impact on the psyche of characters is at the center of ‘The Night of Broken Glass’, Rather, nevertheless, speaks about the issues of faith, gender and caste, making them as an important part of his story. The characters in the novel are as much enraged by the conflict as they are by the prevailing caste system.

“Rosy, a progressive, jeans wearing upper-caste girl who is in love with lower-caste Jamshid; Jamshid’s father Gulam, a cobbler by profession” and some other characters in the novel loath the menace of caste system and are perturbed by it.

In the fifth story titled ‘ROSE’, Rosy while expressing her passionate love to Jamshid and her anger against caste says:

“The world is cruel; it ties us to the stanchions of caste. I will never cease to love you. I am furious to be tethered like this. I want to donate the skulls by planting rose-bomb and geranium-grenades in the putrid, filthy brains of Baba, Papa, Qadri, Masoodi, Suharwardi, Kubrawi, Naqshbandi, Bukhari, Haqani, Mubarki, Geelani. I want to burn down the edifice of the whole damn society who believe that your soul is black dirt because you are a Sheikh while mine is made of white and gold feathers because I am a Syed.”

The enchanting inter-connected stories and equally alluring characters of ‘The Night of Broken Glass’ remain fresh on the mind, even after one finishes reading the novel. With an arresting narrative and stunning conflict, the enchanting novel-in-stories bewails the situation in Kashmir, where people die, live and endure.

Book: The Night of Broken Glass