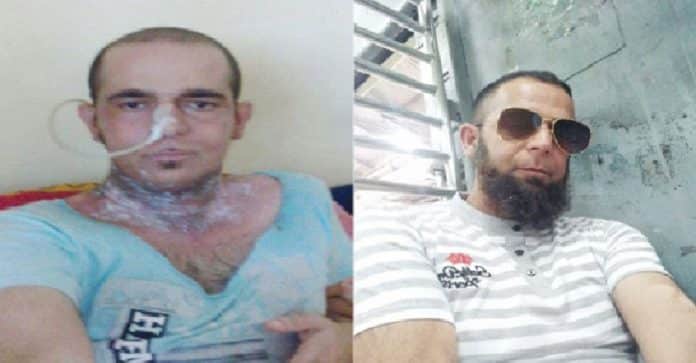 Srinagar: Sajad Nazki, a dynamic young man, was in his thirties when he was diagnosed with Nasopharyngeal Carcinoma in 2013, a dreadful disease in which malignant (cancer) cells form in the tissues of the nasopharynx. Sajad battled cancer for almost 3 years, fighting the dreaded disease with unmatched resilience and unwavering faith in God.

Sajad Mustafa Nazki is one of the rarest cases to survive Nasopharyngeal Carcinoma, despite undergoing treatment for 16 nodes of tumors in his throat. Sajad is up in arms against the killer tumors, actively engaged in helping cancer patients by counseling, guiding and motivating them.

Nasopharynx cancer is native to Southeast Asia, where the prevalence rate is 15–50 cases per 100,000 people and as per the WHO report, cancer kills over 8 million people annually.

On being told that his life may not be so long, Sajad held his tears and tried not to cry infront of his parents aptly aware that if he breaks down they will simply die. He recalls, “I did not cry as I knew if I do my parents will die, I knew cancer meant I was going to die but I had to stay strong for my family.”

As the bad news broke out, everyone cried except him. He acted cold but deep down, he was devastated. Over the time, he will fight his worst nightmares – the metastasizing tumors.

It started with excruciating pain in his throat and the doctors advised ‘nothing serious to worry about’. He claims that a Public Hospital’s lab misplaced his first FNAC (Fine Needle Aspirations for Cytology) test sample thus he had to undergo the test again, that failed to detect anything for 6 months.

Sajad Nazki explains, “I couldn’t sleep at all for 6 months; I was experiencing pain beyond normal limits. It felt like sharp pointed objects were stuck and cutting inside my throat. Few people in the society even speculated that I was just trying gain attention by faking the condition”.

Sajad turned to private labs for FNAC test but they were not defining the disease and therefore, he was running out of crucial time. Ultimately, after 6 months of suffering, a doctor advised biopsy test that revealed all previous consultations were wrong. It was not tonsils or thyroid but vicious tumors rapidly spreading in Sajad’s throat. The tumors were already metastasizing and the chance of survival for Sajad was on a grim edge.

Sajad’s family vowed unconditional support, his two brothers and his cousin all left their jobs and committed themselves to his treatment. Sajad after careful consultation opted for Mumbai, dropping the idea of treatment under the protocol devised by a government hospital here.

“The thought of getting treated in Kashmir scared me to death, as I did not want to die young so I opted for Mumbai. It was life and death situation for me and I was not in for a bet on it”, deciphers Sajad.

Sajad, on reaching Mumbai, got admitted in one of the Asia’s leading hospitals for cancer treatment but Sajad’s case demanded great will power and self-conviction to fight cancer.

Self-evaluating his fettle, he spread the prayer rug and with tears rolling down his eye, began the most propitious prayer, “O’ Allah grant me what is good for me, to You I owe this life, I leave my matter with You and You are the most merciful and benevolent.”

“He was unaware but I observing him. With tears rolling down like rain, Sajad was pleading with Almighty for his life in great devotion and somehow, I strongly felt his prayer was been heard”, said Farhat, his cousin.

Sajad’s case was complicated as the tumors had started to metastasis, blocking the food pipe. For more than 5 months, Sajad was fed through ryles tube and frailty affected his physique badly. Before radiation therapy, he was suggested to gain weight and he had progressed weight of 84 Kgs and it quickly dropped to 54 Kgs, losing almost 30 Kgs after the radiation.

“Always take advise related to your medical conditions strictly from doctors only. While going through radiotherapy, some people called me and scolded me for using mobile phones and many other self-made recommendations”, guffawed Sajad.

Sajad went through chemotherapies and radio therapies to reduce and eliminate the tumors and later surgeries and timely follow ups.

On being asked if he ever lost hope and felt despair, “I always believed in God more than myself. There were times when blood was flowing from my mouth causing internal injuries and unexplainable pain but I kept faith in God and I knew If I don’t kill cancer, it will kill me”.

“There are so many problems patients face here in our state; lack of advanced equipment and trained professionals are the major cause of concern. There is no proper counseling and patients end up in experimental treatment cycles that does not only exploit their resources but also causes them different related diseases”, asserts Sajad.

He has endured so much but he still wears a smile on his face. The room gets filled with optimistic vibes, nothing seems impossible in his presence. Sajad exclaims that his doctor after numerous radiotherapies and high dose medications said to him, “Sajad, I fail to understand, how are you so optimistic?”

Sajad Nazki fought rigorously and defeated cancer and now he has vowed to help other patients battling cancer. He has some 50-60 patients under his counseling from different states across the country. He sometimes goes out of line to help them. Recently, he took 6 patients to Mumbai for consultations.

Many people diagnosed with cancer turn to him for motivation, emotional support and guidance as for them, he is an epitome of resilience. He is hope and inspiration for them. They look at him as a ‘Super Hero’ who has done the unimaginable – survived cancer.

Among those numerous patients who seek guidance from Sajad’s struggle is a senior doctor diagnosed with Nasopharyngeal Carcinoma, though the doctor has outstanding knowledge on the subject but he preferred to seek emotional and motivational strength from Sajad’s experience.

The doctor called Sajad Nazki, “You are not just an inspiration for me but hundreds of cancer patients that are battling with this dreaded disease. Of course, I am very depressed but when I look at you, my resolve gets stronger to fight cancer.”

Sajad’s father said, “I am proud of my son. I will always support him in what he is doing to save lives irrespective of religion, caste and creed. Isn’t that what we as Muslims have been taught to do?”

“We live in an uncivilized society, mostly lack of mannerism and unwanted sympathy breaks the patient’s resolve. He is looked upon as already dead. Relatives gather to see how a cancer patient has lost hair, burnt face with over radiation; such response not only breaks the conviction of the patients but also affects the treatment process.

Cancer is, of course, a dreaded disease but it is curable with proper treatment and care”, reiterates Sajad Nazki.

Around 33% of cancer cases are directly linked with smoking. “I urge everyone who smokes to quit smoking. Not only are they killing themselves but other passive smokers too”, appeals Sajad.

“Most of the cancer patients lose hope after their relatives start crying around them. Please stop doing that! Don’t kill them before destined by Allah”, Sajad Nazki concludes, adding that “I killed cancer before it could me! Hang in there, don’t just give up! This is my cell number: 9796333337. Call me whenever you need my help.”