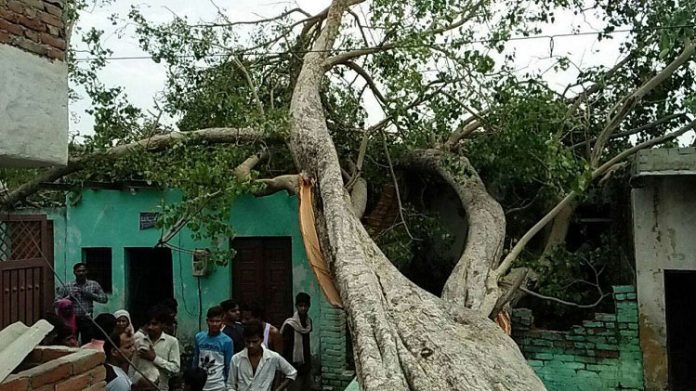 In Madhya Pradesh, a total of 11 people were killed in several districts. In Khargone district, strong winds, rain and storm destroyed mud-houses in many villages including – Kharagone, Upadi, Bada, Premnagar, Gogavan and Bhoinanda.

Three people of a family were killed and one was seriously injured due to lightning in Jamudir Sarwar village under the Hathod police station area on Tuesday evening. In another district, two people were killed in the last two days in lightning, thunderstorm and rain and one person is undergoing treatment. 15 people were also injured in six separate villages.

The condition of the three people is still critical. All the injured have been given treatment in Khargone district hospital. Many trees fell and even the traffic was affected.

In Gujarat, nine people–four in Mehsana, two in Banaskantha, one each in Rajkot, Morbi, and Sabarkantha – were killed due to the storm and rain. The crops have also been damaged in most of the locations.

In Maharashtra, seven deaths have been reported due to heavy rains and lightning in the last two days. Hailstorm was witnessed in Nashik and Pune along with rain. The farmers have also been affected. Lightning killed two people each in Satana and Parbhani and injured one. A person was also killed in Pune, Ahmednagar and Nashik.

The western state of Rajasthan witnessed seven deaths. In Jhalawar alone four children were killed due to heavy rains and dust storm. Normal life was thrown off track due to the sudden rain. While in Baran, hailstorm lashed the place affecting livestock, affected crops, and destroyed mud houses, in Sriganganagar crops were destroyed by a hailstorm. At least 300 villages were affected by the hailstorm.

In Kota, black clouds led to heavy rains and crops were affected. The rain lashed the region and the produce at the market was also affected.

Rains also lashed Alwar, Chaksu, Ajmer and Udaipur rains destroyed produce kept in the open outside the shops in the market and a man was killed after a shade fell off burying him. (Agencies)