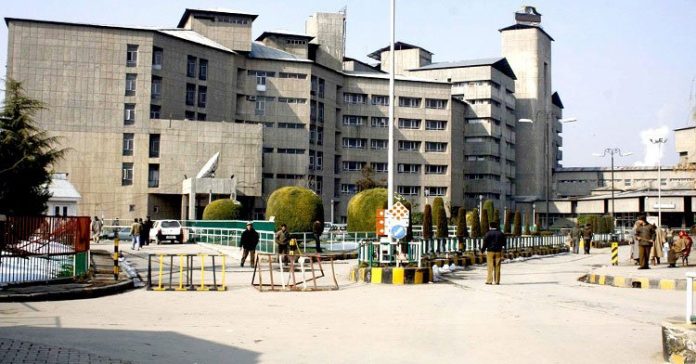 Srinagar: While state government has assured making operational State Cancer Institute (SCI) at Sher-e-Kashmir Institute of Medical Sciences (SKIMS) later this year, there has been no progress on creation of required staff for running the much-needed facility for treatment of cancer patients.

The continued delay in recruiting the staff has now put a question mark on whether the facility could make a difference in treating malignancies in absence of the required manpower.

Work on centrally-funded SCI was started in 2012 and after missing several deadlines state authorities recently announced that the Institute would be completed and started in 2019. However, six years since the announcement of the Rs 120 crore project, no staff positions have yet been created for the 200-bedded facility.

An official at SKIMS said it would not be possible to run the new Institute “properly”. The official said at present there were only 70 beds meant for cancer patients at SKIMS but the existing was far less than the required for running the existing facility.

A SKIMS official said the medical oncology department has only two doctors at present, while the cancer day care ward has only “one or at the most two” nurses to administer chemotherapy and monitor over 20 patients.

In addition, there is a dearth of equipment as well as technical staff to run the advanced cancer diagnosis and treatment equipment, the official said.

“The Institute is already faced with shortage of staff at every level, be it doctors, paramedics, nurses, technicians and administration,” the official said.

Last year over 4800 new cancer cases were registered at SKIMS – 200 more than 2017. However, cancer treatment facilities, despite tall claims of government, have remained stagnant over the years, creating constraints in diagnosis and management of malignancies.

According to the official, over 500 staff positions are required to be created to run the SCI. However, he rued Government’s neglect towards creation of human resource. “Although the government plans to start SCI within months, it has not moved in direction of ensuring required staff,” the official said.

Many officials at SKIMS expressed dismay over pace with which staff positions are filled. “We are yet to complete recruitments that were started years ago,” said a senior administrative official at the SKIMS.

Director SKIMS, Prof Omar Javed Shah said the Institute has already “discussed” the staff needs for the SCI. “The proposal (for staff creation) has been submitted to state finance commission,” he said.

He said that the Institute would “embark on a recruitment drive” once the proposal is approved. “We are hopeful to have the requisite manpower in position when the SCI is ready to be operationalised,” he said.