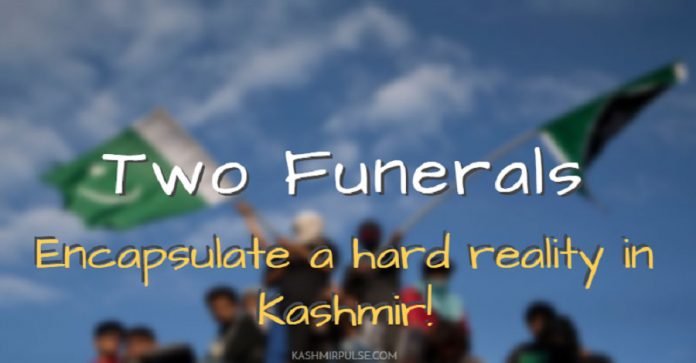 Wherever we are born, we are supposed to taste death. And, whenever we talk of death, we get some achy feeling inside. We literally condemn the same and beg for our safety and for the safety of others. The conflict in Kashmir has only increased our susceptibility!

As this article is about “deaths”, so let me strongly continue by saying that “deaths in Kashmir are happening in the most brutal ways”. Why shouldn’t we call the dead as the victims of conflict then?

On 6th May, 2017 at Malpora, Kulgam, five Kashmiris were killed. For almost six hours, the identification of the slain was not clear rather many confusing reports were circulating on different social networking sites about their identity.

Soon the identity of the slain people got revealed among which three were recognised as civilians, one J&K policeman and another turned out to be a Lashkar-e-Toiba Commander.

While I’m writing this piece, the two among the slains – LeT Commander Fayaz Ahmad & J&K Police Constable Azhar Mehmood are being paid tributes and given their last farewell. The former’s last rites are being administered at his native village, Qoimuh in Kulgam while the latter’s wreath laying ceremony is being carried out at District Police Lines, Kulgam.

The common people of Kulgam paid tribute to the slain LeT commander by joining his funeral in great numbers. Children, men, women, young & old were chanting pro-freedom and pro-Pakistan slogans while taking the slain commander for burial.

The gunmen, who probably were from his cadre, appeared during his funeral and gave him a gun salute. The slain was covered in a Pakistani flag while being carried to a graveyard.

On the other hand, the slain policeman was given tribute by his department at District Police Lines, Kulgam. Seniors, juniors, all top brass of the police department joined the ceremony. He too was given a gun salute. Although, his dead body was covered in a tri-colour, the scene was heartbreaking when his body reached his home. The cries of young, old, women, men and even children were all around.

Tribute was given and mourning continued for both but by different people and in a different way, so I object the claims of those who say that there is selective mourning in Kashmir, which is altogether wrong.

The ground situation is very grim here. This face of J&K Police is unacceptable to their own people and society. They are considered as villains. The two funerals revealed it all! The death of the policeman was mourned by his colleagues and family only. Barely ten kilometres away, tens of thousands mourned the death of LeT commander who was believed to be involved in the killing of the policeman.

The truth is that mourning is done here and everywhere in the world for a person whose death is considered as the loss to an institution, state or the society. The death of the policeman was loss to the police department and his family so they mourned where as the people who consider the death of LeT man as a loss, mourned for him.

Each death is loss for some sections of society in particular and for a nation loss in general. When you see such sudden untimely and brutal killings happening in Kashmir, some join the funeral by their physical appearances while some condemn the same by speech, tweet, et cetera while there are some other people who are not able to present themselves.

We have been judged all the time and in this way, our rights have been curtailed in every possible manner. Point is not to judge on the mere things one is able to see that too without living the life in Kashmir and without living the life as a Kashmiri. Those who judge and claim that there is difference, I would like to react by saying that they may not be wrong in saying the same at their place because in reality, they say what they are shown while the things here are altogether different.

The only difference found in the two funerals, probably, is the way people were eager to get the glimpse of the slain LeT commander. In the slain policeman’s home, if you observe the videos closely, you will find the cries of the family, and of nears and dears only.

The reason is, probably, the orthodox situation JK Police is stuck in. They have to do shelling to their own people. They have to follow the rules and orders to continue their services. They abuse and get abused. They work neck to neck with other forces to quell protests and participate in anti-militancy operations.

Then, they live in the same society. They have to confront the same people. Their supporters say, they do all this for their livelihood.

The ground situation is very grim here. This face of J&K Police is unacceptable to their own people and society. They are considered as villains. The two funerals revealed it all! The death of the policeman was mourned by his colleagues and family only. Barely ten kilometres away, tens of thousands mourned the death of LeT commander who was believed to be involved in the killing of the policeman.

Death not only puts a full stop in one’s life but does have its impact on the lives of others. Straightly, if I talk of cold blooded killings, how can one justify the same. The situation is seen every now and then in Kashmir and every single day, there is witnessed such brutality.

What would be the fun of this living, or would it be justifiable to call ourselves humans after allowing such incidents to happen every day? If we see practically, now the people of Kashmir have learnt to live the life here under these oppressed circumstances. It is not like we are accepting these circumstances but we are now fully prepared for these circumstances. This is the life of mine and of every single individual living here. Life in the most drastic and terrified state!