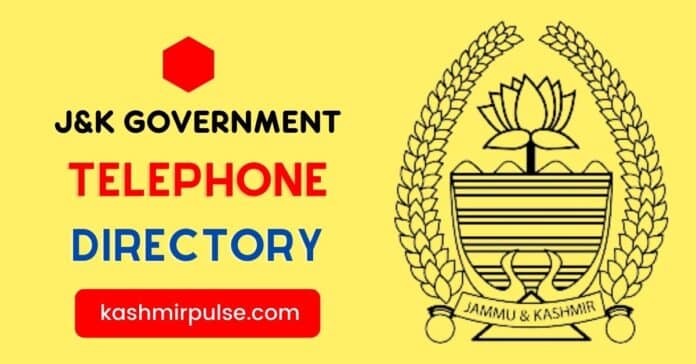 This is J&K Government Telephone Directory and it is being updated from time to time so that it remains useful for our readers.

The government of Jammu and Kashmir is divided into three branches: Executive, Legislative, and Judiciary. Jammu and Kashmir’s summer and winter capitals are respectively Srinagar and Jammu.

On the recommendation of the Central government, the President of India appoints a Lieutenant Governor as the state’s head of state in Jammu and Kashmir. His or her job is mostly ceremonial in nature. A council of ministers is chaired by the Chief Minister, who is the head of government.

The Legislative arm of government is made up of a unicameral Legislative Assembly with a five-year term. Except for “public order” and “police,” which shall remain the purview of the Central government, the Legislative Assembly may pass legislation on any of the issues listed in the State List of the Constitution of India. The Lieutenant Governor also has the authority to issue ordinances that have the same legal effect as acts of the legislature.

Given the reader might have understood the structure of the government, it is now mandatory to provide the required contact details of the officials which are presently a part of the functioning of the government.

The online J&K Government Telephone Directory is provided below and we hope it proves helpful.